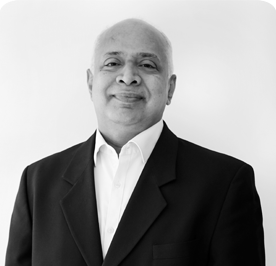 He holds a bachelor's degree in mechanical engineering from VJTI and a master's degree in management studies from JBIMS, University of Bombay. He has also completed the 'Strategic Leadership in Microfinance' course from Harvard Business School, USA & "Strategy meets Leadership" course from INSEAD, Fontainebleau, France. He has worked with various companies in the fields of business development, consumer banking & finance and microfinance across India and the Middle East. His previous employers include Xerox India Limited (formerly, Modi Xerox Limited), Countrywide Consumer Financial Services Limited, ANZ Grindlays Bank, ABN Amro Bank N.V., National Bank of Oman, Ahli Bank and Alhamrani Company for Investment in Trade. He is the Vice Chairperson of the Group Executive Council at AAvishkaar the holding company. He has served on the governing board of MFIN, the microfinance sector SRO recognised by the RBI for 6 years from 2013 including as its President from July 2015 to June 2016 and then as Chairman twice from 2019 to 2021. He is currently the Lead of the Steering Committee of the 39 MFI lenders in Assam liaising with the state government on the AMFIRS'21 incentive & relief scheme 2021.