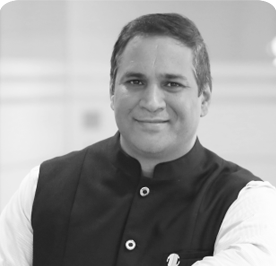 Vineet Rai is a Non-Executive Nominee Director of Arohan.

He was nominated to our Board by Aavishkaar Venture Management Services Private Limited. He has been a Director since October 24, 2013. He holds a post-graduate diploma in forestry management from the Indian Institute of Forest Management, Bhopal. Additionally, he is an Honorary Member of XLRI Alumni Association. He was the founder of our Promoters, Aavishkaar Venture Management Services Private Limited and Intellectual Capital Advisory Services Private Limited, which are part of the Aavishkaar Group. He was awarded the Outstanding Social Change Agent by TiE Mumbai in January 2020 and also featured on the cover of Forbes India (January 2018 issue). He participated in the 'Champions of Change' event in August 2017 organized by the National Institution for Transforming India. Further, he was also appointed by SEBI as a member of the 'Working Group on Social Stock Exchanges' in India. He has also served as a commissioner member at the Global Commission on Business and Sustainable Development.